Here are a couple of my sketches of The Moody Blues show.

The Moody Blues in 2013 at the Holt Center in Eugene, Or. 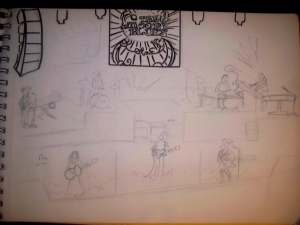 They played 30 amazing songs. Their light show was fun, I was impressed. It was cool that they had a live flutist. Having no live string players was a little bit disappointing. The sound was amazing, never too loud. People might complain about bands that tour with only a few of the original members, but I think this band still had the original members that mattered, Justin? The main guy, his voice is definitely the one on all my favorite songs, and the drummer told jokes and had a thicker accent like Ringo kinda, and he did two of his odd Poem- songs/intros… The space was really nice, its called the Holt center, its gorgeous inside, and everywhere was a good view.  (They couldn’t quite sing the parts that were supposed to be really high for really long though) the drummer said he;s 72!

They played  Isn’t life strange?  Tuesday Afternoon (of course), Question, Ride my see saw, the story in your eyes, the voice, your wildest dreams, blue world, You and me. say it with love” And many more.

One thought on “The Moody Blues.”