Yakuza Heart Attack “If the world is a post apocalyptic wasteland, it won’t stop me from making music.”

Yakuza Heart Attack is Keith Rankin: guitar/keys, Matt Emmons -on keys/Synth, Chris Mengerink on Drums  and Justin Baker on bass. They play otherworldly EPIC instrumental pop on synthesizers. They are embarking on a tour that includes Arkansas, Texas, Missouri, Kentucky, Illinois and Tennessee. Read more and hear their music at myspace.com/yakuzaheartattack 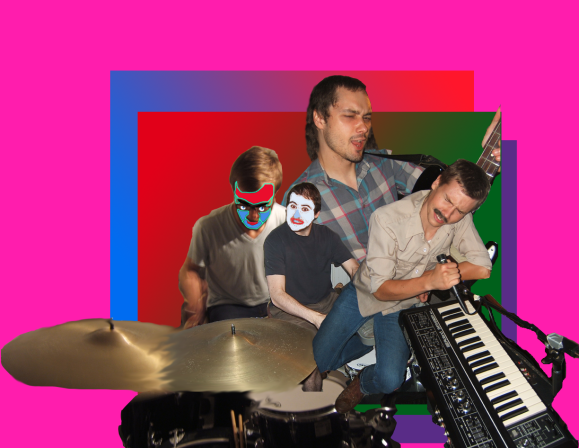 Do you mind if my adjectives JUMP out at you in attempt to quantify this music? Punchy! zippy! elaborate, presenting, fanfare- tadaaa! its Yakuza Heart Attack- Exploding Fireworks of LOVE!
Dayton’s Multi-instrumentalist Kieth Rankin presents this triumphant 2nd album from Yakuza Heart Attack. (Also behind such bizarre sonic experiments as the Crane Engine and Erasers Fantasy, under his moniker “Keith Kawaii”)
One obvious highlight is the epic “Tears of the Judge,” which contains portions that are plodding and intense like metal, but there are excursions into sillyness, quick synth blips appear out of nowhere to herald a new section, as if a space ship has blasted away an opponent, only to encounter another more terrifying one.
The blissed out “Goodbye Rainbow Road” has wacky synths in conversation that remind me of Jean Jaques-Perry. “Power Surge” is pure candy joy for fans of YMCK, and sometimes sounds like the music in old Capcom games like Megaman, and other times resembles the music in Super Mario RPG. Keith uses bright and sugary tones frequently, especially on ”Hyper Fun Zone.” The bass and drums are also excellent and multiple tempo changes and unexpected diversions keep things spontaneous. The multiple layers of sound remind me of the joyous circus extravagance of Belaire, or what it would sound like if Ratatat were to expand and commit itself.
This music is great for sledding or snowboarding, or any other busy activity full of excitement!

Isaac – Did you record this yourself? as a band? or are you playing everything yourself? do you have label support?
Keith- I recorded/produced the album myself… half using an old Fostex recorder, half in Logic on a mac (and a little bit on Acid Pro on PC) I’m obviously a fan of ‘in the red’ style recordings, where the sound is very loud and bursting. The record is unmastered, mainly because the sound files are peaking so bad that not much can be done with the dynamics. I thought mixing a more “modern, heavily distorted” aesthetic with synthesizer music would be cool. I’ve been making recordings like that for years, and now it seems like a pretty trendy thing to do (even the Flaming Lips last album was pretty blown out)!  Our label head (at Squids Eye Records) actually became gravely ill right as the YHA II album came back from press. He thought he might die. So we were left a bit stranded, with tons of CDs but no immediate plans for distribution. Most of the attention we got in 2009 came from blog posts, from me emailing places with a free download of the album and putting it up on our myspace for free.

So you released the cd for free on the net first. Then you plan to release it in stores?
That’s the plan for now… Our first album is on Amazon, Itunes, all that. The second one will hopefully be out soon. People can contact me through our myspace right now if they want to buy a CD or get a download. I think the question of how music is sold and obtained is the most important and complicated issue for musicians and the broader industry right now. I would obviously love to make a living off of music, be able to live from selling albums and touring, but you know, how many musicians in America actually do that? I read some statistic where only like 25 artists sold more than 100 thousand albums last year or something. I can’t remember the exact numbers, but the point is that our cultural view of music has changed forever, and everyone has to adapt. Kids aren’t going to magically stop downloading torrents. And it’s not up to me to decide how someone else wants to consume things. If they want the physical album, its there, if they want mp3s that’s there too. Giving the album away has helped us out, just by getting some tiny internet recognition.
I guess the big question is if people will get so accustomed to downloading that physical products fall by the wayside. Or what happens if people stop buying music altogether? Speaking for myself, if the world is a post apocalyptic wasteland, it won’t stop me from making music. Maybe we should start weeding out the money hungry opportunists masquerading as “artists” right now?
Isaac- What do you say when you are trying to convince a club or bar that you are worth their time? How do you try to make yourselves stand out? Your music is unique, but when you have to describe yourself, what words do you use?
Keith- I think it’s fairly easy to “sell” ourselves to certain areas, because a lot of elements in our music cater to niche genres that people are passionate about. All you have to say is “This shit sounds like a 70s Cop Movie Soundtrack mixed with King Crimson” and the right people will have a strong reaction. “70s synthesizer music like Wendy Carlos, early electronic stuff like Raymond Scott and Edgard Varese…” there’s just a lot of reference points that are starting to bubble up in popular indie music at the moment. So when you say, “We are heavily inspired by Clara Rockmore,” if someone is down with that, they’ll get excited, because it’s been only a minute since that style was “cool.” Analog synths alone are a big drawing point. There’s also the whole chiptune angle. I’m fine with it all. I also love that 70s music like Cluster and Neu! are becoming so canonized now. Kraftwerk is already the bible to a lot of people.