Crushed Out! and Browntown

Crushed Out have an amazing retro sound: a very surfy wet guitar tone and peppy drums.  A couple covers were quite welcome and got the crowd up and dancing. Someone might superficially call them a “rockabilly White Stripes.” Vocals are high and airy, like Elliott Smith or Crosby Stills and Nash. Lots of lyrics about love, birds, sharks and surfers. My favorite was “Sweaty, Sweaty Dress” and I’ll never get the epic riff from “To Sing True of Love” out of my head.

I tried a realistic look

Moselle does the art for her band, I think its neat that a single person does all the art for the merch, cd covers and t shirts, that way there is a single vision and oeuvre. She puts waves and dripping water in the art, so I put some in my drawing. She also did animation for the music video, “to sing true of love.” She told me part of touring which is just as important as sharing music with fans is seeing the beauty of the natural world in our National State Parks. She listed her favorite as the Anhinga trail in the florida Everglades because it was so full of wildlife. “Like a zoo, but the animals are free and in their habitat.” Another thing I like to ask touring bands is, “what do you eat on tour?”

Moselle- “We like to cook rice and a vegetable, a one pot cowboy meal. We try to eat out as little as possible. We eat souerkraut, mac and cheese with Kale, one treat we really like is canned trout from Trader Joes, on a stone wheat cracker with onions.

She said the band raised money to record their album by playing in small New Hampshire bars in the Mt. Washington Valley. “We brought our own sound system and we’d play for 3 hours for a couple hundred bucks. We started a music scene, kids started bands just for the chance to open for us. We played at the Red Fox restaurant in Jackson, New Hampshire and it eventually turned into the weekly dance party in town. We read an article that listed us in the top 10 bands of New Hapshire and we said, “Who are the other 9? we want to be friends with them!” -Moselle

Was guitar your first instrument?

“I started playing when I was 11, to Led Zeppelin and Nirvana’s “Nevermind.” Guitar was  basically the first instrument I stayed focused on.” -Franklin

Two of your songs have a very cool blues vibe, with turnarounds. (Early in the Morning and Wormtongue)
I think that makes them sound a lot like the White Stripes, ( is that what someone really unfamiliar with the blues guitar would say?) Is it really Mississippi John Hurt or someone older who popularized those familiar turnarounds? did you first play blues turnarounds learning Jimmy Paige songs?
I like how all the songs sound surfy, but they all sound different too.
Maybe “Mermaid Chant” has the most surf-like riffs, but “True Love” sounds like Buddy Holly or a girl group song.

I’ve seen some guitarists play with several delay pedals in chain. How do you get your delay tone? Are the same pedals you play with live the ones on the record?
You had two amps, right? what is the reason for that? does a different mix go to each one?
Is one clean and loud, and the other… a tube? with more of a crunchy or “tight” sound?”
“I have one delay pedal that is a ‘tape echo simulator’. I used a 1968 Echoplex tube tape echo on our album TEETH, but live the unit gets hot and stops producing echo in the middle of the show. So I’ve bought this El Capistan Strymon echo pedal. It’s almost identical to the analog tape echo. I have a Spring reverb running through a 1965 Fender Bassman, to get a surfy guitar sound. I have the tape echo running through a 1964 Silvertone 1483 bass amp so the sound is wider. Everything of mine is vintage but the pedals and my stratocaster, which is new from a builder in NYC.” 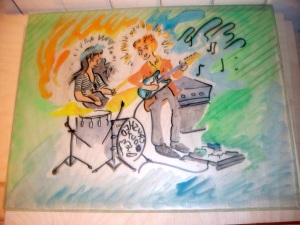 This is a monotype, I painted watercolor and water soluble markers on a sheet of plexiglass over the original drawing. Then I pressed it against a wet piece of printing paper and transferred the image.

to see the old post i made about this band look here. (the drawings are better this time.) 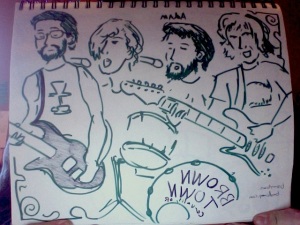 Brown Town opened the show, they are a garage rock band from Corvallis. They play a fun bouncy style reminiscent of the Kinks. One member sings and plays the tambourine and another looks like Chris Dowd. They played a Monkees cover.