‘The Bandulus play hot smooth soulful ska. Some songs reference old rock and roll like Little Richard. The songs are simple, but bright and fun and have tempo changes and a real groove and positive mood. Their coolest songs might be “The Times That We Had” and “Does that make me a Good Man?”

I think Jeremy assembled a new band with people in Portland. Emma’s back up vocals improve every song and her smiling presence cheers up the crowd. At this show (opening for Save Ferris) they were joined by Shane Connor from the Longshots on Keyboards and didn’t have any horn players. 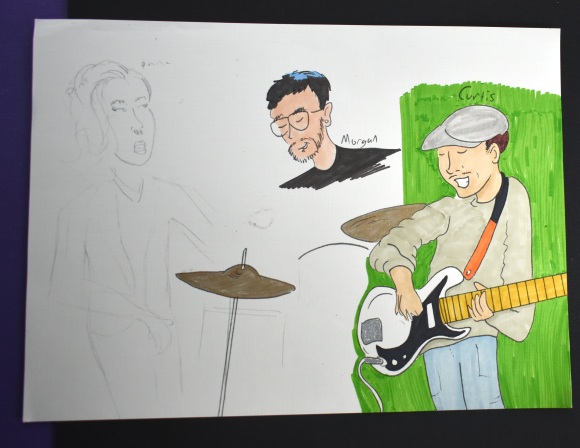 See this bonus drawing has Curtis on the Bass, and Morgan who played drums a second time. Notice the blue reflection in his hair makes him look like an Archie character… I drew Emma a second time, and there was something good about her expression here but I didn’t finish inking it because I have SO MANY DRAWINGS to add.

Save Ferris were totally fun. What a blast to hear these familiar horn riff again! I think the bass was too loud and that may have been intentional to cover some sloppy playing but we had fun anyway. There were so many smiling faces in the crowd. Save Ferris are way more than just their hit cover of “Come on Eileen.” I love a dozen of their songs, “The World is New,” “I’m not crying for you,” “What you see is what you get,” and I believe their new song “Anything” is just as fun as their old ones. They played “Do I Even Like You” which is a Fugazi cover. “Super spy” and “Everything I want to be” are so epic. Even though the original members aren’t touring with Monique, they still sound like its 1998 again. They played “I Know” from the “10 Things I Hate About You” soundtrack, and even went loud and pop punk heavy for “Mistaken.”

Monique is a charming frontman and she had some fun stage banter for us about how now in these depressing times, we need ska music more than ever! I see they added new summer tour dates, including Seattle and Salem with Warped Tour.

I’m going to add a bonus drawing because I think Monique is beautiful and this drawing doesn’t show it.  Also, this captures the drummer and the bass player, who switched between an electric bass and a standup bass.