Character actors give me a thrill
set the screen on fire in black and white films
I’ll never forget these legendary men
who made charisma cool again.

Laszlo Loewenstein from Hungary
became an actor and a celebrity
if your film needs a  creepy foreigner
look no further than Peter Lorre
a quiet boy who loved the stage
didn’t know how far it would take him
befriended Bertold Brecht at a tender age and
terrified audiences  in Fritz Lang’s M
When the nazis took power:  it was a shock
Lorre went to London and worked for Hitchcock
He’d often  play a spy or a contact with a crutch
as in “Secret Agent” or “The Man Who Knew Too Much”
in Maltese Falcon tries to kill Marlowe two times
in Casablanca he was the whiny guy who dies.
He played Mr. Moto in 8 films
He didn’t enjoy them but needed the work
a morphine addiction is a bitch, so I’ve heard
so he’d put on the glasses and don a black cap
to play a buddhist detective who brings along his cat.
passage to maresille in 1944
arsenic and old lace, the conspirators
Three strangers in 1946, black angel and the verdict
in the 60s appeared in Roger Corman’s show
films based on the works of edgar allen poe
the man’s an immortal: I’m glad to tell the story
of screen actor legend peter Lorre 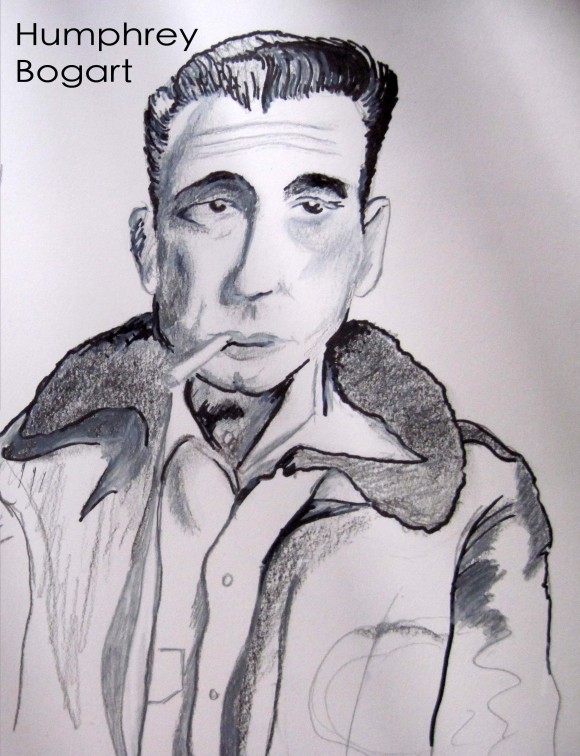 Humphery Bogart enjoyed chess and boating
but he was hard boiled no sugar coating
At 19 he enlisted in the Navy
Started on Broadway in the 1920s
bored and lazy, he thought he’d try acting
he called it “the softest of rackets”
Was in “Up the River” with Spencer Tracy.
at first he only played gangsters and killers
after early success with the petrified forest
and some B movie silliness
like “The Return of Doctor X”
He became one of Hollywoods biggest stars
solving murders and chasing cars

Honorably stayed behind in Casablanca

Organized a delegation to Washinton DC
Against the house un american activities committee
He was sympathetic to those who’d been blacklisted
and coached younger coworkers, never hamfisted.
tired of getting screwed by the hollywood “greats”
made his own production company in 1948
produced Tokyo Joe, and Sirocco
In a lonely place and Knock on any Door
Made beat the devil  with Truman Capote
which was mostly improvised fueled by lots of whiskey
John Huston got him out of Hollywood’s sheen
to the Congo to film the African Queen.
He made a few last films before death came to call including
Sabrina and the Harder they fall
Took drinking and complaining: elevated it to ART.
Screen Actor Legend Humphrey Bogart.

Toshiro Mifune, Toshiro Mifune:
you want to be remembered make 150 movies!
when your mind pictures a samurai
you are probably thinking of this guy.
known as a Ronin who laughs at danger
played a Yakuza in Drunken Angel
in Straw Dog he played a homicide cop
He got a few juicy roles but he just couldn’t stop.
In Roshoman plays a rapist and a thief?
Kikuchio was the crazy one who kills the bandit chief
The man with no name in Yojimbo
reprised the role in Sanjuro
looked like a japanese Elvis, a stud
he was Macbeth in Throne of blood
in 1980 “Shogun”
directed by Spielberg in” 1941″
He could play a sadist or a saint with grace
he’ll kill 30 men with a grin on his face
in 1978 was Lord Incognito
he inspired clint eastwood and quinton tarantino

150 pictures, usually as the lead
the man loved to work: he wasn’t in it for greed.
The grimace, the sneer, a dignified looney
Screen Actor Legend Toshiro Mifune