Chris’ mural is finally up! I got to help paint it and it was fun. While I was filing in greens and reds I remember thinking, why am i 29 years old and this is the first time I have worked on a mural?

Thanks so much to Chris Green for hosting this wonderful day in appreciation of comics, and for Brady and Rebecca File for bringing up Jeffrey Lewis. I have been a fan since I heard his album “the last time I did acid I went insane and other Favorites” back in 2001.  I played his songs on KSUA while I was a DJ there. It was  so nice of them to feel I was an appropriate opener. I played two “Damn you Damn you Damn you,” “Sometimes it all reminds you of a story” and “Dancing in the street” as well as old favorites “anthropic principle lullaby” “Homonculus Reductio Ad Absurdum” and Ileah even requested “William H Macy.” It was nice to get a request, though I hadn’t done that song in five or six years, I tried to remember it; I did an a cappella version and forgot the ending. Ah well.
I enjoyed Jeff’s set immensely and he played my request: “Broken Broken Heart.” In that song there is a line “thank you pain for teaching me, thanks but its been more than enough.” This line reminds me that every aspect of humanity/psychology is there for an evolutionary reason, those who felt what we know of as heartbreak” had an evolutionary advantage over those who didn’t. The concept is kinda buddhist, and just one of many amazingly clever lines in Jeff’s songs. He also played an old favorite “Back When I was Four.” He even played a song from his first album and nailed it, “The last time I did acid I went Insane,” with a very weird poem at the end, long and rambling , psychedelic and strange recited by his brother and him in unison. It was nice to hear “Seattle” and these other old tunes. Sometimes touring musicians don’t play songs from their early career, wanting only to promote the new material. He played one Crass song as a request “punk is dead” and one that was maybe by Jack Lewis (I assumed as he sang the lead) about a band of teenagers on tour getting into fights, drinking too much and trashing hotel rooms. 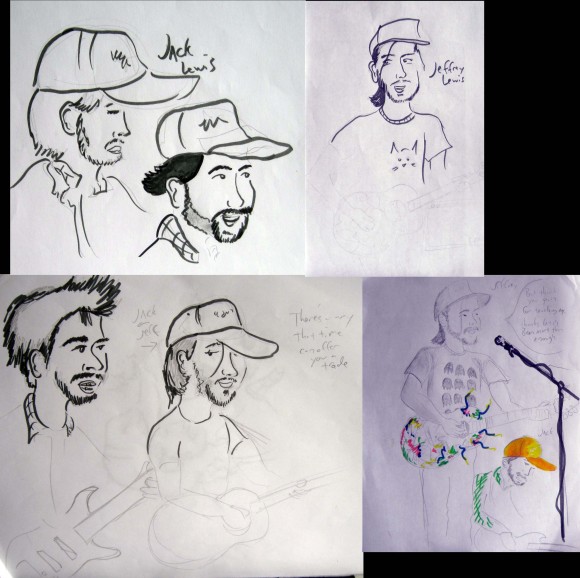 I found it especially inspirational to see pages of his notebooks that included Rom, robot knight. The character has been an obsession for Jeffrey, and he has traditionally started each notebook over the years with a drawing of him. He redrew pages of Watchmen with Rom replacing characters and also pages of Daniel Clowes “Like a Velvet Glove Cast in Iron.” Sometimes Jeff and Rom were teammates, other times mortal enemies, with Jeff blaming Rom for his comics addiction, and cursing him to a life of loneliness. Jeff is seen throwing the robot knight out of a helicopter, and as he falls he shouts “Jesus Fucking Christ!”

Jeff and I also discussed some aspects of the phenomenon of traveling book presenting. He commented that there was a certain justice in traveling with books, as they inevitably get damaged and this forces the performer to continually create new material. It was great to get to see him play in my home town.

On sunday I got to catch “The Glass Bead Game” a band that played in Fairbanks at the Howling Dog back in 1972 and 1973. Riff Rafson plays bass, he and I would talk music and economics back when I was friends with his daughter. Pat Fitzgerald plays drums, and he was the sound engineer for the first and third Paper Scissors albums. Bill Black was playing Harmonica and he was my 2nd grade teacher. He always just nods at me and politely says hello, even if he’s in the audience to one of my weird shows at CCH.

Glass Bead game were a very fun 9 piece band playing blues and 70s covers. Their horn section really was the icing on the cake, with harmonica, and two flute players, Al green on sax would sometimes play two trumpets, providing a delightful chorus effect, or would play a midi synthesizer breath controller. It was pure prog! Phil on keyboards always added something pleasant to the song, but I’m a sucker for blues piano and b3 organs. Donna on flutes sounded amazing, etherial, psychedelic and joyful. Props to Josh Bennet doing sound for mixing all those instruments live into something coherent.
http://www.srsalaska.com/srs/Home.html