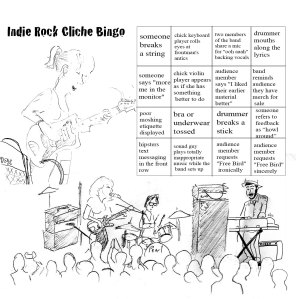 Here is a little comic I made. The bands illustrated here are the Sahara Hotnights, Marnie Stern, and members of Netherfriends and the Raveonettes. You will have to click on them to enlarge enough to read.

Caleb Kuntz added video of me performing “Knit that Shit” with Band of Zorses from the february 5th pub league.

New Teen Paranormal Romance will play a show this Friday (march 11) at the marlin. its 5 dollars and profits go towards CLUCKING BLOSSOM. We are performing with the Good Daze, Jesse Hobbes, and my good friend Greg who calls himself “Black Flowers Black Sun.” Highly Recommended.

Please add us as fans, there are things we can’t do until we have over 35 fans. Also, it helps when we are trying to book shows if the booker knows we have some fans out there. 🙂

My friends in the Stumblebum Brass Band are coming back to Alaska for a tour.

They will play in Fairbanks June 4 at the Marlin, I will be their opener. They also have dates all over the state in May and June, including: Talkeetna, Anchorage, Homer, Denali and Trapper Creek. Their live show is amazing. They have gotten arrested for playing outside on Christmas without a permit. Punk rock.

Check out their tour dates at
http://www.stumblebumbrassband.com

The Stumblebums borrow from New Orleans street jazz for the bones of their skeleton, then punk rock for the teeth. . Those snare hits slam and that tuba is huge in the mix. The tuba is so expressive, and its pilot is adept at giving each blast character and verve, even when the tempos are enough to exhaust to anyone sane.The trumpet soars and the vocals, sometimes shouted through a bullhorn, sometimes crooned with the whisky soaked gravel, provide many “did he really just say that?” moments. Most of these songs are fast, offensive, wild and fun.
Many songs come in around 2 minutes, and would be fantastic on your mix tapes or inserted into radio playlists for a satisfying wtf moment.
Many of these songs are reproductions of sketches from their first album- redressed and touched up. Shortened and tightened perhaps from two years of intense live shows. On the first version they sounded a little flat, soggy and honestly, like they were just playing into a mic in a dead room. They sound fantastic now, Smidge’s voice and lyrics channeling vice from the great frontmen he follows, Janis Joplin, Iggy Pop, Louis Prima, Tom Waits, a touch of Hank Williams, and of course a nod to all the hip-hop frontmen who revel in being as ‘nasty’ as they can.
On “Try” they actually slow it down and let things swing. “My body’s had enough, lord I tried,” it’s a refreshing reintroduction to the blues; guitarless, undeniable, and immediate.
Jonny Balls comes out from behind the drumset to sing some lyrics on “GIrls.”  His spastic and perky drumming is hard hitting and perpetually consistent. They let him cut a brief solo on “I Wanna.” Johnny wheres the cowbell? Subtle rhythm changes in “Dirty” prove that the drum set can be a melodic element in punk rock, and help establish that the Jazz influence make sense.
Martin Bisi’s production is in your face and always faithful to the live show- the only place where there are obvious effects and overdubbing is in “Blue Eyed Blues.” Otherwise the disc just seems to be mixed and mastered very conservatively and expertly.
“Pink Cadillac,” is a nod to those 50s “oldies but goody” songs, but of course the tempo picks up and Smidge delivers a rapid fire rap. As he sings “Cuz I ain’t so bad,” he must be winking and acknowledging the nod to Louis Prima. “Hey Jonny” quotes hey Ronnie” and has a spoken intro that reminds me of the Shangri-La’s “Leader of the Pack.” It’s a celebration of cheesy pop culture, with a post-modern revisionism, or its just hilarious dirty fun. Try to keep a straight face while hear the lyrics, “Hey Jonny he’s so fine, he’s so fine I wanna fuck him from behind.”
I listened to ska punk from california back in the 90s, some of these catchy zippy trumpet lines remind me of the thrill i felt when I first heard that sound: the rich white kid angst version of authentic jamaican music.  The closest this gets to it is “Sweet Spot,” with a very busy bass line from Disco Ronnie and some “ooh ah’s” delivered like emo “ois.” This would be a great choice for a single, as its free of curses, full of catchy hooks, and the tempo changes make it consistently energizing. Here the Stumblebums enthusiastically turn up the joy and invite their listeners to dance. This track is an inspiring demonstration as to why people play music- because its the second most fun thing you can do with your fingers, I mean lips!

For fans of: Cherry Poppin Daddies, Reel Big Fish, Galactic, but that marginalizes them too much, anyone who loves passion, and doesn’t mind foul language will love this disc!