We throw together five new bands with about 22 people. They practice all day, then come up with unique originals and sloppy covers, and play them for friends at the pub. This year had a rendition of “All Along the Watchtower” with powerful vocals from Annie Bartholomew and solos on a steel drum.

This band was called “Tilted Blue Bungalow, and they demonstrated the highest level of musicianship and professionalism of the evening. We had Jake Turman rapping about his “butternut Squash sack” in a creepy Halloween rap. 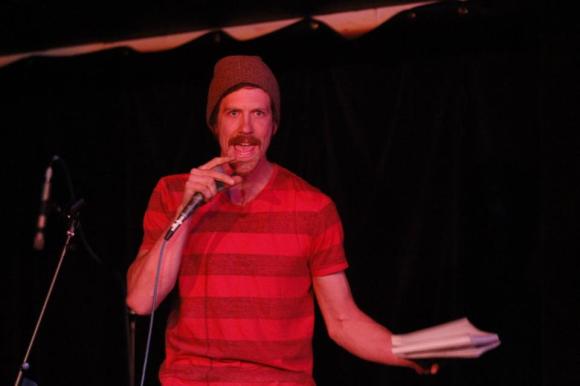 We had the Dirty Ethanolics- a band that included Meghan Packee of Not Enough Flannel, Carey Seward, Nate Harris of The Avery wolves and Paul Heflinger singing exaggerated true stories of drinking and debauchery- this is the song that won “BEST SONG.” 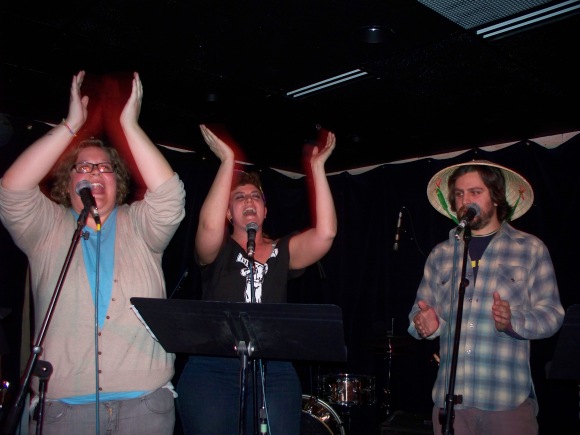 The chorus said “at least I didn’t crash into the Bently Mall.” This band also won the “best raw meat” award, a spontaneous award the judges invented for them.

“Truck Vs Mall” featured Eli Barry Garland, Bernie Bousa, Bryan Whitten and Nathan Zody all bedecked in flowery boas and masks. They won best band and best cover as well, for a wild rendition of “F the Pain Away” by Peaches. 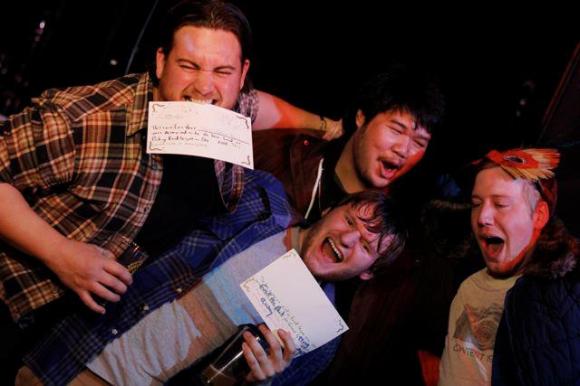 “The Cool Dudes” won most blind (as all members wore spectacles), most cute and loudest. They played two covers I didn’t recognize and a silly medley of “The End of the World as we Know it” and “We Didn’t Start the Fire.” Sounds tough… except that they mumbled all the lyrics intentionally except the familiar chorus.

Rachel Elmer of “The Cool Dudes” photo by Sarah States

We didn’t award a “drunkest band” this time. I heard it was a tradition, but I didn’t mind that we skipped that one. Prizes were donated by the Pub, the comic shop, Fairbanks Music Mart, Conor Rainy and I.

A Huge Thank you to everyone who participated, to Heather, the Pub and Frank. Also to Sarah States and Annie Bartholomew for these beautiful photographs. (They look much better than the crappy ones I took)
I also want to thank my band Eamon Stack, Jake Turman, and Forrest Andreson. I couldn’t have done it without you. Thanks for being up for playing “Self Esteem” by The Offspring, though it was difficult for me to rap and drum at the same time I muddled through it!

Thanks also for the creative lyric suggestions, here are the original lyrics I sang that night.

I get nervous I almost barf
girl asks me to take off her scarf
and her head falls in my lap, crap
i need a needle and thread, stat

Lookin for a nice girl will you pass inspection
or be like my last weekend: cast no reflection
eyes falling out from a zombie infection
the compass is going in all directions
with all the zombies on OK cupid
its looking like ok putrid

I’m used to questions like whats your income
i got indulgences saved would you like to sin some?

I got a nice car but she’d rather fly
or teleport, girl i gotta ask why
to the drive in movie its about her uncle
i move in close but something is funky
her mother sent angry flying monkeys
to chaperone, I lost my boner
guess I’m going home solo, I’m a loner.

WHISKEY! (in G)
G C
whisky for the lumberjacks and for the bikers too
Amin D
whiskey for the monkeys and the keepers at the zoo

whiskey for china, korea for japan
whisky for the beach bums with their hair full of sand

whisky for the sailers sailing round in boats
whiskey for the milk cows, the chickens and the goats

whiskeys so delicious it never goes sour
pour it in your garden, give it to the flowers

whiskey for the judges, and heather and frank
whisky for the bartenders, and for the wallstreet banks!