I drew people and things at Trapper Creek. I played as a 3 piece band, Bernie Bousa on drums and James Brookes on Bass. we played songs from the new album, and some paper scissors classics.

I also drew lots of people and things. Here are some of my drawings. 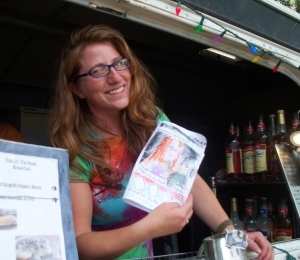 End of the Road Coffee

I submit these as evidence that beautiful girls are not the only things I draw.

The gutter Shieks (one member not pictured)

I didn’t draw the other member because I already drew him and when He takes a photo of the drawing that he took from me and emails it to me i will post it here.

Unicorn Justice. (that’s not the name of the band)

This cute band was led by ANgie, but Hunter played some 90s covers- “for the kids” including Soul Coughing (yes!) 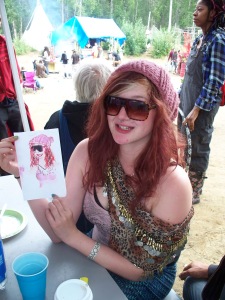 I also got a chance to see “the No Chance Charlies” a very kooky band made up of nearly all of the members of the Overby Family Band, but they are dressed in dresses, heels, makeup and flirt with the audience more. I do prefer the Overby’s set, because the clarinet and trombone were so fun, but I can understand wanting to mix it up. I played with a band so as to not repeat the same performance from the May Trapper Creek.

I even got to play a little with Jake from Goat Rodeo at the second stage.

Now I am off to Eugene. I hope to play some music there, maybe it will be in the cards to travel to Seattle, Portland, Bend and ?? to play shows there. If you know of somewhere I could play, or a library where I could do a comics workshop, please let me know!