Political cartoonist, hero, despised liberal, journalist and funny guy Ted Rall visited the Eugene Public Library to tell us about his new book, “Snowden.” Here I drew him like he’s a superhero on the cover of a marvel comic book. 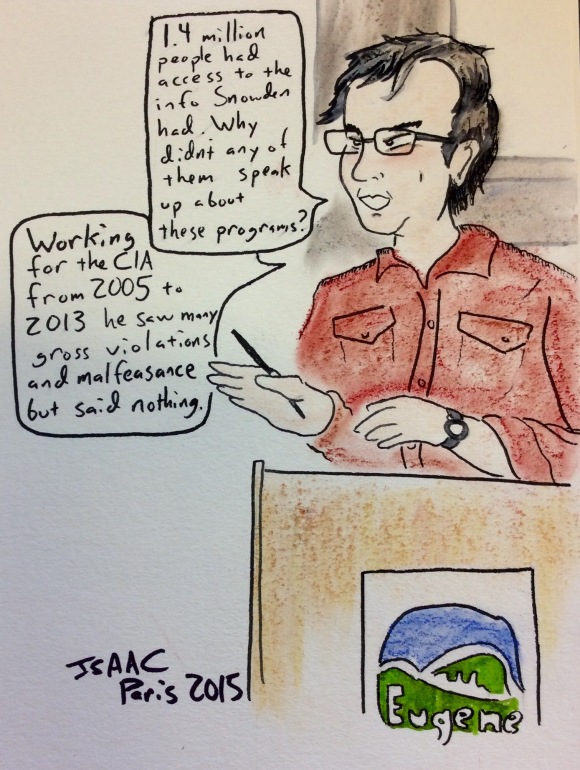 Snowden is one of the most fascinating figures of modern times and I’m excited to read Ted’s new book. He was accused of racism for depicting Obama as “ape like” ( more here). He was fired from the LA times for disparaging (though true) comments about the Los Angeles police.( you can read more about that here)

Here are some of my favorites of his cartoons.

On the back of his book are some quotes by such luminaries as Ann Coulter and Rush Limbaugh.

“Ted Rall just does things to upset people so his name will get in the paper.” – Ann Coulter

Whoops, Ann sounds like you are talking about yourself.

“What is sad is that such an imbecile and such an ignoramus ends up as a prominent cartoonist in major newspapers.” – Rush Limbaugh

Rush, it takes a lot of hard work to be published in many newspapers! No one listens to imbeciles, well, except for you. Some of ralls critics say, in addition to being hurtful, mean spirited and rude, he CANT draw. I disagree? His art is economical, utilizes stereotypes and sometimes, like here, shows detail and understanding of perspective. Sure, his heads are generic and Picasso-esque, but the communicate effectively a message, and that’s what s important in cartoons.