Jeffrey played for us and shared his comics the day before thanksgiving at the wandering goat. It was a wonderful show. Mem and Brent were a very tight band, providing perfect back up vocals and patiently waiting for their turn to play even if Jeff sometimes does long poems and comic presentations that don’t involve them. Sometimes Jeff is doing a Leonard cohen/shel Silverstein/Woody Guthrie for the current generation (with a hearty dose of humor and existential dread) and sometimes it’s a complete freak out with a jammy wild improvisational style. Jeffrey Alexis is a national treasure. AND he makes comics too. Wow. 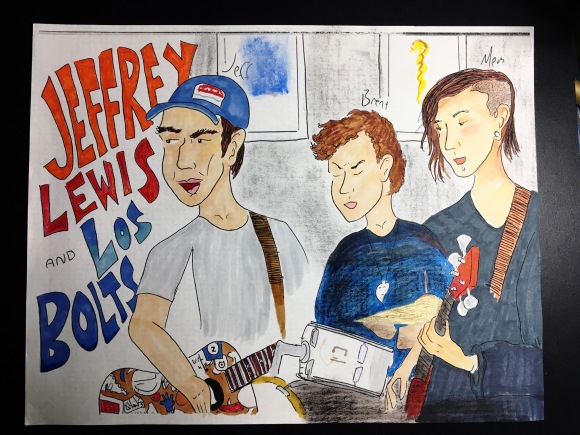 Here is a more expiramental version of a drawing…. and here are some kaleidoscopes I made with pixelmator. Now, I’m sure someday I’ll look back on this as a silly waste of time but by gosh I think they are fun now. 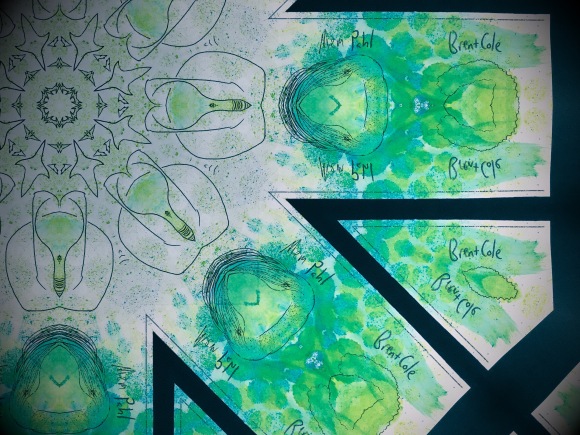 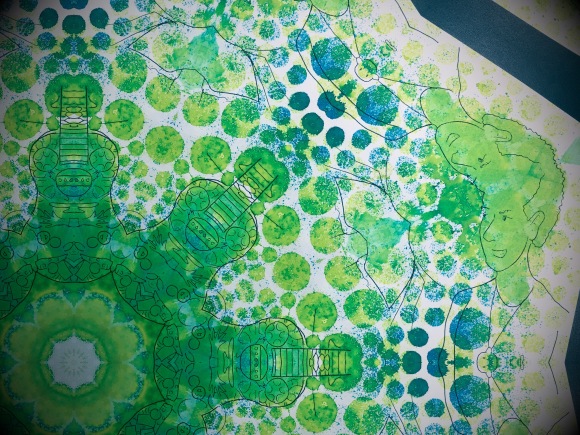 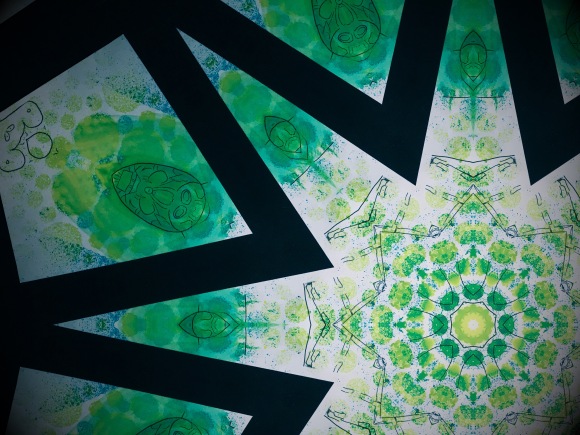 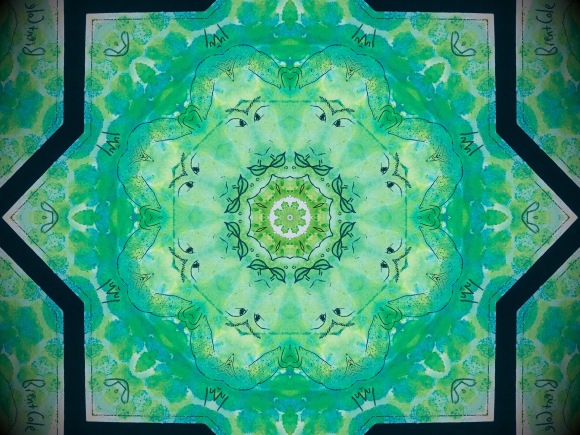 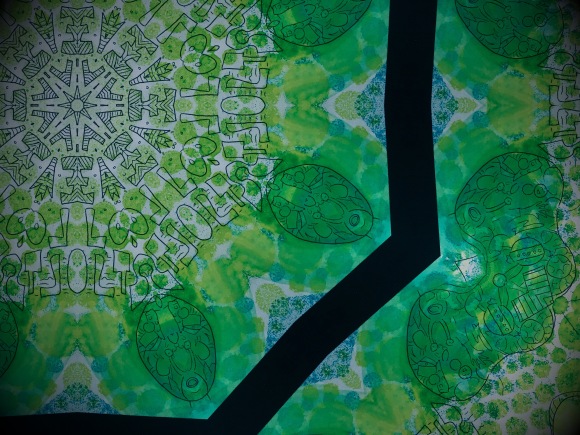 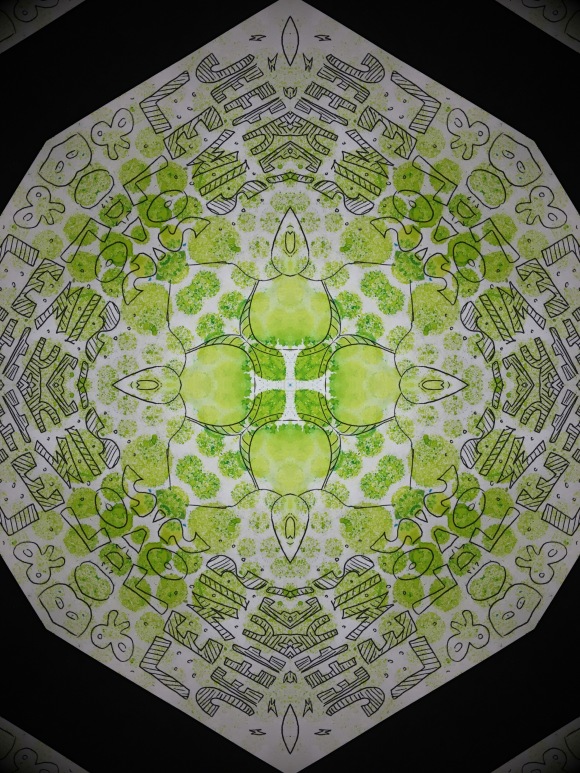 Paleons play huge thundering spacey post rock! Shimmering, shattering, convalescing, coalescing, brobdignian riffs! They have an analog synth player! I often can’t hear what he’s doing under the volume of the cymbals and the huge guitar amps but… the gear is cool.

Evan plays intelligent folk music: about unions, the importance of sharing, environmentalism and peace.  They played a Phil Ochs cover, “love me, love me, love me, I’m a liberal.” I have had that song stuck in my head ever since, especially the chilling final line, “now I’m older and wiser, and that’s why I’m turning you in.” Check them out online at evangreer.org 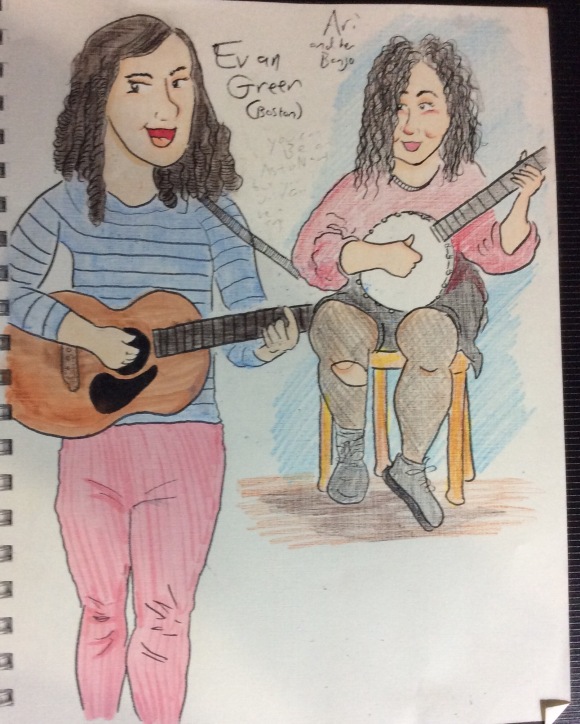 I enjoyed Ari and her banjo, she is playing at my vaudeville show In April. She plays fingerpick style with great control! Beat Alice was a very confessional and humorous songwriter.

I played a show here in Eugene at the Wandering Goat, opening for Eleinvaders, an indie jazz swing band.  Thanks for watching! I’m so lucky to have Shane Connor from the Longshots on tenor sax.

and as a bonus, here we are playing “Stanford Prison Experiment”

I played a few songs at this show, a fundraiser for Joel West, and drew the other performers. I especially liked TJ.  Thanks for having me fellas. 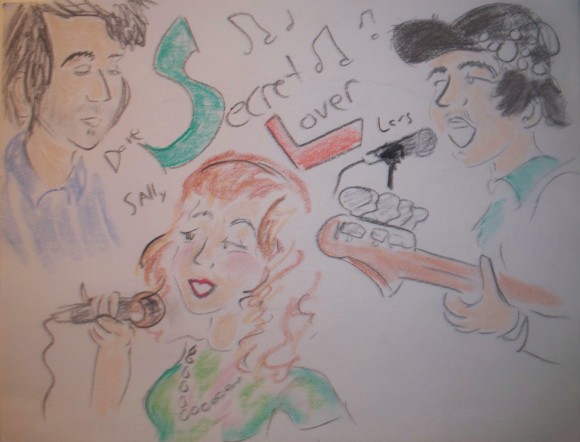 All the way from Massachusettes, Secret Lover played Wandering Goat last night. Their fun, nostalgic pop is reminiscent of Blondie and Be Your Own Pet. Sally danced around and encouraged the crowd to get into the groove. The boys all sang backup and demonstrated their hip East coast fashion sense.

She didn’t really have a blue wig, but, I call it artistic liberty. My favorites on their EP are “3D glasses” and “Perfect Wednesday” but all the songs were good.

Here is their interview, front woman and booking agent Sally answered the questions.

Do you get booked alongside other “girl bands” or bands with female members? What are advantages or disadvantages to that?

I think people do go out of there way to book us with other “girl bands.”  it’s always awesome playing with other girls,  and it’s not always something you see at shows. But still it’s more important to me just to play with good bands and good people than to play with strictly girl bands.

I assume you are traveling in a van? what is the make and model? Do you have any stories of it being less than reliable?

Yup, we have a van. very reliable. it’s a dodge caravan, ‘96 or ‘98. we really haven’t had any trouble with it. It’s Dave’s and he keeps it in tip top shape. he and the van have a special connection.

In my experience, traveling with men in vans results in a macho one upmanship of filthy jokes, is this the case for your band? Sally, do you keep the boys in check? or joke along with them?

They are filthy, vile little things. no, just kidding. apparently they hold back when I’m around, although there definitely are lots of jokes about butts. especially in Butte, Montana.

You’ve got a certain sound that is very retro, was this a conscious decision, or what organically result from your styles combined?

I’m not sure. we actually started out wanting to be a disco band, which is an older sound. but the retro psych/pop vibe that a lot of people pick up on wasn’t really a conscious decision. I was really into Broadway and cabaret when I was a kid, I’m sure that those early music experiences affect the way i write songs. the guys all grew up listening to the  music their dads liked. 60s stuff mostly. Besides the disco thing, which was always a bit of a joke, we never set out to sound like anything or to be a certain type of band. What came out was a pretty natural emotional response.

who does your album art? I like the look of masculine and feminine images mashed together.

John! He’s our guitarist. If you need anyone to make album art or flyers, ask him! Feminine and masculine mashed together, that’s an awesome way to describe it. In a way that’s how I feel when I’m performing.

All the  songs on The Lasso are really fun and sound great!  Perfect Wednesday, 3D Glasses, and Yesterdays Man, are fantastic! I appreciate backup vocals. Your lyrics and delivery are so sassy and spirited.  The guitars having chorus effects really give the record a “spooky” and late 70s, early 80s sound. what pedal do you use to get that sound?

Thanks! no pedals, but the amp has a built-in chorus.

What are the goals for the band? who do you want to play shows with? Definitely to keep improving  our sound and put out great albums.  That, of course, takes time. More short term, I would like to put out vinyl and tour overseas. We wanna play with all the freaky weird bands across the country.

Do you have an agent? Does a member of the band do that? If so, isn’t it exhausting? How do you fight burnout?

I (sally) do it! I like it actually. It’s interesting figuring out how to talk to people– what kinds of words get people’s attention, what tone to use,  and so on. It’s also fun to talk to people you never otherwise  would have met/had a reason to speak to.

What is a reliable cheap food source you turn to on the road?

GRUEL. We bring rice and lentils with us and cook it at people’s houses. it gets real mushy and we put it into a big bin and call it gruel.

There you have it folks- Thanks Sally and the whole band! Listen to their record; its awesome!

They shared the night with 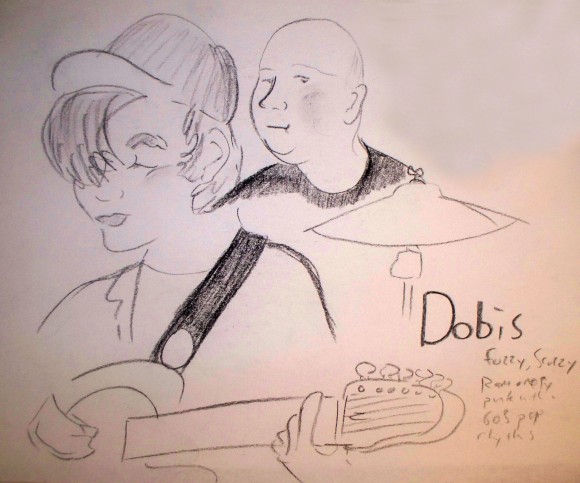 A heavy loud instrumental band along the lines of Work, Tycho, Mogwai and Russian Circles. Lots of pedals and very technical playing. I would go see them again.